Above is documentary footage taken by Frank Wasser at the closing event of The Enemies exhibition at The Hardy Tree Gallery, London on 20th July 2013.

Sam Keogh delivered a performance of Taken out of/put into Oscar's bin outside the gallery while I performed a response - a physical, mental and verbal navigation of 'sites' - inside the gallery space. Both performances were executed during an intermission in the event's program.

Below is a series of statements produced during my performance. Select to enlarge. 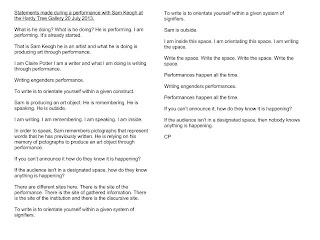 The Enemies is a year-long program of events produced by S J Fowler.


The Enemies project seeks to explore the possibilities of poetry as text, as language, as art, when it is married to the expansive potentiality of alternative modes of expression and / or fundamentally different artistic mediums.

Email ThisBlogThis!Share to TwitterShare to FacebookShare to Pinterest
Labels: Collaboration in 'Enemies' Project