Notes from JUSTINE by Lawrence Durrell 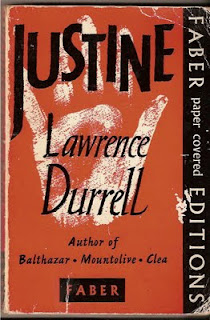 It is such a solace to think back to that first meeting. Never have I been closer to them both - closer, I mean to their marriage; they seemed to me then to be the magnificent two-headed animal a marriage could be.


Here our bodies were chafed by the harsh desiccated winds of Africa, and for love we were forced to substitute a wiser but crueller mental tenderness which emphasised loneliness rather than expurgated it.


How well I recognised her now as a child of the city, which decrees that its women shall be the voluptuaries not of pleasure but of pain, doomed to hunt for what they least dare to find.


"After all," I remember her saying, "this has nothing to do with sex," which tempted me to laugh though I recognised in the phrase her desperate attempt to dissociate the flesh from the message it carried. I suppose this sort of thing always happens to bankrupts when they fall in love.


She took kisses like so many coats of paint.


Perhaps one day she will meet a man before whom all these tiresome chimeras will fade into innocence again.


At least the invert escapes this fearful struggle to give oneself to another. Lying with one's own kind, enjoying an experience, one can still keep free the part of one's mind which dwells in Plato, or gardening, or the differential calculus. Sex has left the body and entered the imagination now; that is why Arnauti suffered so much with Justine, because she prayed upon all that be might have kept separate - his artist-hood if you like.


It was as if now that the flesh was dying the whole funds of his inner life, so long dammed up behind the falsities of a life wrongly lived, burst through the dykes and flooded the foreground of his consciousness. (nb. death of count baldassare, proust)


We use each other like axes to cut down the ones we really love.


Guilt always hurries toward its complement, punishment: only there does its satisfaction lie.


I reminded myself that she was not a pleasure-seeker, but a hunter of pain in search of herself.


...compiling the days of his early childhood in single condensed emotions born from visual memory.


His character was as thin as a single skin of gold-leaf.


"Minds dismembered by their sexual part," Balthazar has said once, "never find peace until old and failing powers persuade them that silence and quietness are not hostile."


At the same time, of course, he fully recognised that suffering, indeed all illness was itself an acute form of self-importance.


THE CITY
You tell yourself: I'll be gone
To some other land, some other sea,
To a city lovelier far than this
Could ever have been or hoped to be -
Where every step now tightens the noose:
A heart in a body buried and out of use:
How long, how long must I be here
Confined among these dreary purlieus
Of the common mind? Whenever now I look
Black ruins of my life rise into view.
So many years I have been here
Spending and squandering, and nothing gained.
There's no new land, my friend, no
New sea; for the city will follow you,
In the same streets you'll wander endlessly,
The same mental suburbs slip from youth to age,
In the same house you'll go white at last -
The city is a cage.
No other places, always this
Your earthly landfall, and no ship exists
To take you from yourself. Ah! don't you see
Just as you've ruined your life in this
One plot of ground you've ruined its worth
Everywhere now - over the whole earth.


When there is something to hide, one becomes an actor. It forces all the people round one to act as well.


I walked slowly among these extra-ordinary human blooms, reflecting that the city like a human being collects its predispositions, appetites and fears. It grows to maturity, utters it prophets, and declines in hebetude, old age or loneliness which is worse than either.


...but strangely enough I thought of it not as a personal history with an individual accent so much as part of the historical fabric of the place. I described it to myself as part and parcel of the city's behaviour, completely in keeping with everything that had gone before, and everything that will follow it.


...warm hair and mouth, and the treacherous nervous movements of a body which folded itself against one as if hurt, as if tender from unhealed wounds.


This is what is meant by possession - to be passionately at war for the qualities in one another: to contend for the treasures of each other's personalities. But how can such a war be anything but destructive and hopeless.


She was a walking abstract of the writers and thinkers whom she had loved or admired - but what clever woman is more.


"We who have travelled much and loved much: we who have - I will not say suffered for we have always recognised through suffering our own self-sufficiency - only we appreciate the complexities of tenderness, and understand how narrowly love and friendship are related."


Loving is so much truer when sympathy and not desire makes the match; for it leaves no wounds.


...that people only see in us the contemptible skirt-fever which rules our actions but completely miss the beauty-hunger underlying it. To be struck by a face sometimes that one wants to devour it feature by feature. Even making love to the body beneath it gives no surcease, no rest. What is to be done with people like us?

Far off events, transformed by memory, acquire a burnished brilliance because they are seen in isolation, divorced from the details of before and after, the fibres and wrappings of time. The actors, too, suffer a transformation; they sink slowly deeper and deeper into the ocean of memory like weighted bodies, finding at every level a new assessment, a new evaluation in the human heart.


"Lovers are never equally matched - do you think? One always overshadows the other and stunts his or her growth so that the overshadowed one must always be tormented by a desire to escape, to be free to grow. Surely this is the only tragic thing about love?"
Posted by I said, at Wednesday, November 18, 2009