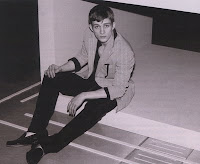 -Recreation Myths : Nick Clements by Suzy Prince
In the introduction to his sadly commercially unavailable book, Simulacra, he explains that these photographs are 'reconstructions...but not of any existing photographs or illustration. Instead they have been reconstructed partly from the memories of those who were there at the time, and partly from my own memories of events, films and photography of the period.'
When I met up with Clement's in his London townhouse to talk about his work, he elborated further: 'if I did it from photographs that would be re-enactment and what I'm doing is re-creation. One comes from memory and feeling and intuition the other is a historical phenomenon.'
I'm impressed by Nick Clement's work, but I was still curious as to what had driven him in the first place to go to all the effort.
'I don't know why,' he answers. 'Even as a teenager I had a feeling for the past. I think I'm just one of those people, and there are plenty around...'
'I lived in Germany and Italy for two years each. The working classes in those countries look to the bourgeois classes for the way they should ideally dress and act, and social manners and so forth. Since the end of World War II it has almost been the opposite way around in Britain whereby people look to the working classes for ideas. Which is unusal and it turns Marx and Engles idea about 'whoever owns the means of productions own the ideas of the day' on its head, because certainly the British working classes have an incredible cultural influence on Britain. More than the aristocracy of the middle class. Even though ultimately of course, they get the money out of it.'
Posted by I said, at Wednesday, October 08, 2008